Looking in the Window: The Mall Walker, a Caring Heart and a New Year's Giveaway 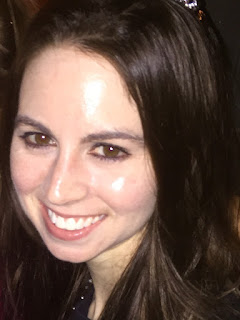 We all have it, and we can give it to others for free? What is it?

It’s a smile. There are so many different kinds of smiles. There’s the flirty smile that says, “Hey, I really like you.” There’s the friendly smile, and the one that’s reserved for babies that says, “Oh, isn’t he or she just the cutest thing?” There are even half-hearted smiles that seem to say, “I’m obligated to speak to you,” and of course, sheepish smiles that say, “Yeah, I did it.”

But one day I received a smile from an unlikely source. 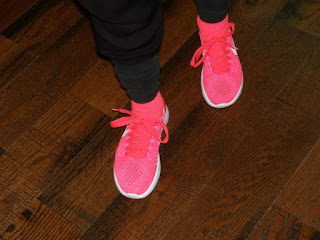 Since I have a back problem, I’m restricted to walking on a flat surface, so most of the time I join the mall walkers. Even on days when I’m not rushed or tired, getting the exercise seems a chore. Sometimes it's a challenge to avoid bumping into folks who stop suddenly to gaze at a window display or those in groups who take the entire aisle. And, that’s not to mention hurrying to get out of the way of the train the kids ride around the mall.

As I made my way through the crowds this day, I worried brushing into someone would create more of a hazard than usual because I had strained a muscle. Even if I had an uneventful trek, would I aggravate the unhappy back walking?

All of my concerns must have shown on my face.

I rounded a corner and headed toward a young man, probably about the age of my grown daughter. He gazed at me for a moment, and just before we passed each other he winked, grinned a smile that said, “Yeah lady, you go for it” and nodded. For the rest of my workout, I carried his smile with me and forgot about the ache. Near the end of my excursion it occurred to me how a gesture, which cost nothing, and took very little effort on the part of the young man, lifted my spirits. Obviously, he cared about others, even an older woman with a pained expression on her face. 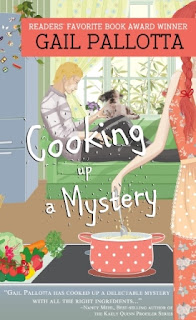 About Cooking up a Mystery

Laney Eskridge worked to put her husband through dental school. Then he left with another woman. She's on edge from the emotional scars and her parents' deaths. Then she hears unexplained noises in her new tea house, and her anxiety is tripled. Add a budding romance with Eric—a guy with a fear of commitment—and it's all too much to handle. She cuts ties with Eric and plunges into making her business pay off.

When Eric discovers that Laney's in danger, he vows to protect her. But can he make a lasting promise? Will she trust him? . . .and when they overhear a threat that could cause national turmoil, will anyone believe them? There's more brewing than herbal tea in Cooking up a Mystery.
What People Are Saying
Gail Pallotta has cooked up a delectable mystery with all the right ingredients: rich characters, page-turning suspense, and heart-touching romance. One warning. Don’t read this when you’re hungry! With all the great food references, you could gain five pounds!  Nancy Mehl, Bestselling author of  the Defenders of Justice and the Kaely Quinn Profiler Series and the Quantico Files. Nancy Mehl
From an Amazon Reviewer. Good food, Suspense and a Mystery. What more do we need? Laney's restaurant is described so well I wanted to drop in for some of her delicious cooking. But I'd want to leave before night when the banging pots and pans stirred up fear and a mystery. Cooking up a mystery is a delightful story. I was unable to figure out how anyone could come and go without using the door, or how so much noise was made with nothing disturbed by the time Laney got enough nerve to check out her kitchen. Although a suspense, the story is not frightening, and I appreciated that. The romance between Laney and Eric was just right, as was the way the mystery played out. Good Writing!
Buy Cooking up a Mystery on  Amazon
Barnes and Nobleean=9781522398806

And anywhere else books are sold online.
a Rafflecopter giveaway

Connie Porter Saunders said…
Hi Gail, I am a smiler, and I can't meet or pass someone without offering a smile. Sometimes I'm ignored but most people will return it. They may be shocked but they do give it back. Best if all, it truly doesn't cost a thing!
Thanks for a post that made me 😊.
Connie
cps1950(at)gmail(dot)com
January 12, 2022 at 6:48 AM

Gail Pallotta said…
Hi Connie, That's wonderful. We need more smiles, and I know what you mean that most return it, and others appear to be shocked by it. I'm glad the post made you smile.
January 12, 2022 at 7:17 AM

Anonymous said…
What a wonderful, uplifting post! I am a smiler, too, but I never really thought about the impact that a smile would have on others. Then one day about a year ago I was very preoccupied and upset, and when I stopped at a red light the driver next to me just looked over, gave me a big smile and a thumbs up. It changed my whole day! And it made me realize how something so simple, yet so genuine and heartfelt contact someone in a way that lasts forever. Let’s all keep smiling!
January 12, 2022 at 7:39 AM

Anonymous said…
Sorry, I did not mean to comment as “anonymous”!!! This was a wonderful post, thank you very much. Best wishes, Regina Andrews.
January 12, 2022 at 7:51 AM

kaybee said…
Nice devotional, Gail. It takes so little to make someone happy. Thanks for sharing.
Kathy Bailey
January 12, 2022 at 10:27 AM

Carlene said…
What a wonderful reminder of the importance of a smile and a random kind word. Thank you!
January 12, 2022 at 11:09 AM

Carol James said…
What a wonderful post. I love hearing about someone who is positive and encouraging. We never know the influence an encouraging word and a smile will have.
January 12, 2022 at 11:48 AM

Mary Preston said…
A gentleman tipped his hat at me just yesterday. I smiled all day.

Thank you for stopping by and for your kind words. It's so true. Sometimes a smile or encouraging word can go much further than one would think.
January 12, 2022 at 2:30 PM

Thank you for coming by and how refreshing to know there are still gentlemen tipping their hats. I'm glad he gave you a smile.
January 12, 2022 at 2:31 PM

Barbara Britton said…
What a nice reminder to smile more. I love to get and give smiles.
Happy January!
January 12, 2022 at 4:22 PM

Karen Malley said…
Thanks for sharing. We never know how much our simple gestures can help others. With all the masking the last two years, I miss smiles! I look forward to the day when we can all show our smiles freely again!
January 12, 2022 at 7:17 PM

Thank you for stopping by. Happy January to you too!

Popular posts from this blog

March 23, 2021
A Warm Welcome to Barbara Britton Are you familiar with the daughters of Zelophehad? Let us know and you will be entered into a giveaway of an e-Book or print copy (U.S. residents) of  Lioness: Mahlah’s Journey.  To enter to win leave your answer and an email address below. Thank you for having me on your blog today, Gail. It's my pleasure. Thanks for sharing Bible verses and a yummy recipe with us. My favorite Bible verses have always been Philippians 4:6-7. How can one not like a verse that says “Do not be anxious about anything…”  After I received a breast cancer diagnosis, I added the preceding verses to my favorites. Philippians 4:4-5 says: “Rejoice in the Lord always. I will say it again: Rejoice! Let your gentleness be evident to all.” How does one rejoice with cancer? I knew no matter the outcome of my diagnosis that I would be with God in Heaven. My eternal life starts on this earth, doing life with Jesus each day. I also had my church family and Christians all over the
14 comments
Read more

Looking Out the Window: Author Tracy Krauss Talks About Her Books and Her Life as a Teacher

October 03, 2011
Tracy will be giving away a copy of  And the Beat Goes On.  To enter to win leave a comment and your email address.    Hi Tracy. First, tell us a little about yourself. I work as a high school teacher. I teach Art, Drama and English – all the things I love. My husband and I used to be in ministry but we are taking a sabbatical of sorts. Our four children are all grown up, but at one time I homeschooled them for several years. We dragged them around the countryside, moving about 15 times (I actually lost count) so it was a great solution. Besides writing, I paint, lead worship and play the piano at our church, and direct an amateur theatrical group. Life is full. Full, indeed. Were you an avid reader as a child? If so, what did you read? I loved reading as a child and I still do. I read all the ‘Anne’ books by Lucy Maude Montgomery, lots of Judy Blume, Beverly Cleary, and ‘The Adventures of ...’ Series by Thornton Burgess. Then I got seriously into Edgar Rice Burroughs and read
23 comments
Read more

Check Out All of My Books On My